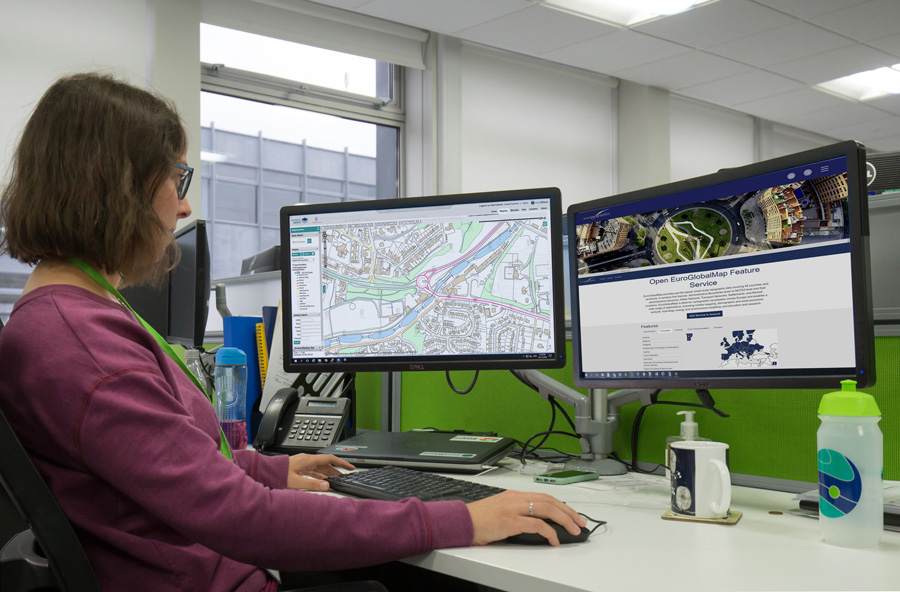 Stirling, Scotland, 12 June 2019 – An online mapping portal designed to demonstrate the potential of a single access point to official European geospatial open data was launched at the Geospatial World Forum in Amsterdam.

Developed by Scotland’s thinkWhere, the user interface was also presented at the EuroGeographics Extraordinary General Assembly held in Leuven, Belgium.  This was attended by delegates representing National Mapping, Cadastral and Land Registry Authorities from 27 countries across geographical Europe.

Delegates at the EuroGeographics meeting were given a live demonstration of the interface, and were encouraged to try it for themselves by registering at https://www.euro-geo-opendata.eu.  “The user interface is excellent and initial feedback from member organisations is very positive,” commented Mick Cory, Secretary General and Executive Director, EuroGeographics. “It provides a valuable first step in realising economic and social benefits of high-value geospatial open data from our members, the National Mapping, Cadastral and Land Registration Authorities of Europe, and has been a key delivery of the project.”

The Open ELS project follows the commonly used web services architecture ‘publish-find-bind’ with the work by thinkWhere forming the ‘find and bind’ element. A catalogue of published data and services was created from information from service and data providers.  This included themes such as Open EuroGlobalMap Service, Open Regional Gazetteer Service, Open Cadastral Index Map Service and demonstrations of open web feature test services for addresses and buildings. This information was used together with existing European location services technical components and open source technologies, to develop the user interface.

Co-financed by the European Union Connecting Europe Facility, the Open ELS project concluded on 30 April 2019 after two years of work by the project partners. It aimed to maximise the use of authoritative geospatial information by providing certainty about what is free, and under what terms and conditions.  In addition to the thinkWhere developed user interface, these included the identification of Open ELS use cases, an appraisal of the potential economic  and social benefits of open data from authoritative sources and a policy and legal framework for Open ELS defining the use and re-use of data.

EuroGeographics is a not-for-profit membership organisation representing 63 organisations, such as Ordnance Surveys in the UK, the Federal Agency for Cartography and Geodesy in Germany, the Norwegian Mapping Agency and the General Directorate of Mapping in Turkey.