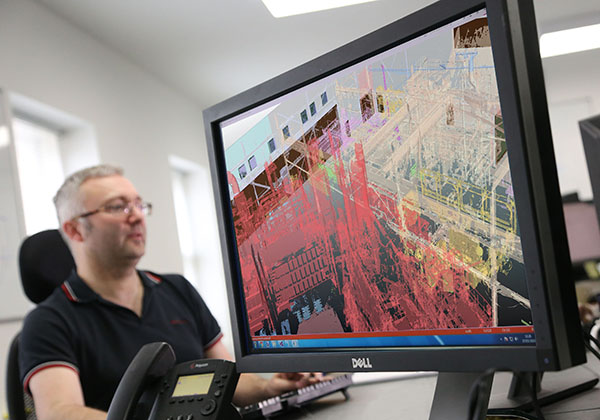 Maidenhead, 04 March 2020 – Engineering consultancy Hatch has transformed its handling of laser scanned data on major infrastructure projects by using Pointfuse software to classify and manipulate billions of individual measurements. Originally used on a project to produce as-built plans of an aluminum casting plant, the application of Pointfuse realized significant savings in data processing time, reduced the impact on Hatch’s IT infrastructure and delivered CAD compatible floor plans for the first time since the facility was constructed in 1973.

The Mississauga, Ontario office of Hatch was originally commissioned to produce detailed floor plans and undertake flow studies of a multi-level, mixed use facility comprising both hazardous industrial processes and office space. Hatch commissioned a full 3D laser scan of the facility resulting in the capture of more than 120 Gb of data. Initially civil designers at Hatch tried manipulating the raw point cloud data in order to locate walls, floors, ceilings etc., however this proved extremely labour and computer processing intensive.

“Using the raw point cloud data we were able to make a start on the floor plans,” commented John Hemingway, Senior Project Manager at Hatch. “However, despite spending in excess of 60 projects hours our rough sketch was incomplete and our systems kept crashing due to the size of the point cloud. We quickly concluded this approach was untenable.”

Using Pointfuse the original point cloud was converted into a classified mesh model in less than two project days. Having created a 3D model where individual features and surfaces could be selected and classified as distinct layers in the Pointfuse model, the envelope geometry was then converted into a parametric BIM model of the facility. This model was exported and presented to the end client as a multi-level floor plan in CAD.

Pointfuse also supported the team at Hatch helping them to further optimize the classification of the mesh model to identify and extract the location of emergency fixtures such as fire extinguishers, eye wash stations and emergency exits. Isolating the geometries of specific elements in the classified model also meant that dimensional information of specific beams and column supports could be extracted for structural studies.

“With the support of Pointfuse we were able to meet the delivery requirements and exceed the client’s expectations,” continued Hemingway, “and, having proved the power of Pointfuse on this project, we will definitely be looking for opportunities on future infrastructure planning projects.”