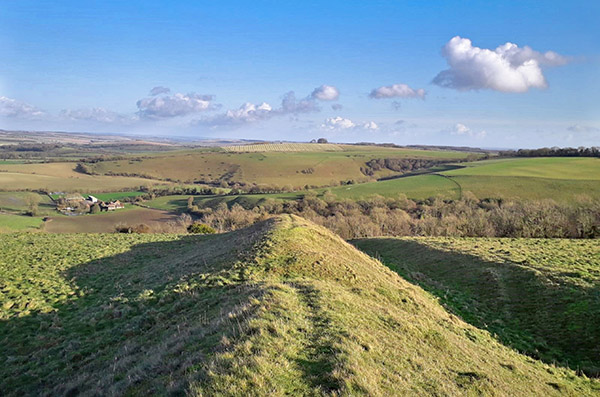 A National Lottery Heritage Fund scheme, the Chase and Chalke Landscape Partnership, focuses on the traditional heart of the Cranborne Chase Medieval royal hunting grounds together with the river valley to the north east known locally as the Chalke Valley. It encompasses an historic borderland, where the ancient shire boundaries of Dorset, Hampshire and Wiltshire coincide.

“Cranborne Chase is an area well known for its high number, density and diversity of archaeological remains including the Dorset Cursus, an Iron Age and Romano-British settlement at Woodcutts and several Roman roads, but many secrets remain to be uncovered.” commented Anne Carney, Funding and Partnership Officer at the AONB. “Using the Bluesky LiDAR data, we hope to gain a much better understanding of the archaeology beneath our feet, and involve communities in the investigation and care of these sites.”

“The Cranborne Chase is an unusual landscape type in that it is largely wooded chalk downland – most downland has been cleared – and the woodlands conceal a wealth of information on past human activity,” continued Carney. The Bluesky LiDAR survey was flown in March 2020 and the 16 point per metre dataset was delivered as a georeferenced point cloud. The LiDAR data was then processed to create highly accurate Digital Surface and Digital Terrain (DSM / DTM) of the area which it is hoped will reveal evidence for historic woodland industries such as saw pits, charcoal pits and lime kilns.

“Bluesky was able to demonstrate extensive experience of providing LiDAR for archaeological sites, including wooded areas, showed a thorough understanding of flying in MOD airspace and delivered on-time and on-budget despite bad weather and additional complications caused by the COVID pandemic,” she concluded.

The Champions of the Past project runs until spring 2024 and in addition to digital maps of archaeological sites, which will be made available as an online resource, will produce reports on the work of volunteers and their findings.